The Deviant Nerd - The Mating Habits of the Modern Geek

The Mating Habits of the Modern Geek
The Deviant Nerd
Brought to you by The Taming School, for when you want curling up with a good book to feel like a good post-coital cuddle. 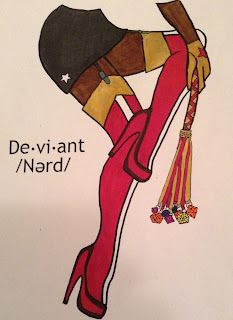 Any tips for how geeky guys talk to girls?

And tends to apply to other aspects of life too; there is a reason why kinksters are more often than not geeks. Think about it. What is kink if not geeking the fuck out of sex? Role play and code names. Elaborate, often homemade or hard-to-acquire toys that require skill and practice to wield. An entire lexicon of terms and library of books created to encapsulate the minute nuances of what a person is into. It’s taking the very simple, very basic act of sex and finding ever newer ways to make it as complicated and complex as we can; what is more nerdy than that?

So, yes, my heart goes out to the nerdy guys, kinky and vanilla alike. It’s often so much harder for them than it is for the norms or even for nerdy girls. Because no one ever teaches you how to go for what you want and so often the social game of dating is playing by rules and conventions that just weren’t made for you. That are, in fact, often setting you up for failure.

Take for example, the classic art of the pick-up line. From what I’ve seen, there are so few men in the world who can actually pull these off. It takes a suaveness, a charisma, and—yes—a level of attractiveness that the vast majority of men—geek or not—just do not have. I’m not even sure if many movie stars can pull this off; after all, don’t we all kinda roll our eyes when it happens—and, worse, works—in films?

And, yet, the practice persists. And I don’t know why.

For instance, I saw a geeky guy at the bank a couple of days ago in a Jayne hat—and, if you don’t get the Firefly reference, we may not be nerd-compatible enough to be friends. Anyway, I was waiting for him to finish his transaction so I could compliment him on it.

When he breezed right by me to hit on a Jimmy Johns girl, saying very intensely, like, two inches from her face:

“So there’s a spaceship traveling at the speed of light, can you guys still get there?”

1.) Aw, man, learn to scent your own. I was right there. And, while it may not have ended in a date—I mean, even to a geeky chick, this isn’t the most stellar of first impressions—I would have at least been able to come up with an answer to your question beyond “Uhhhh...” and a look that clearly says she thinks you’re nuts.

Most nerds—gotta love ’em—wear their nerdom on their sleeves. Literally. With T-shirts and shoulder bags. With keychains dangling off back packs and patches like bumper stickers on laptop cases. We, so often, fly that geek flag proudly.

So, if you’re a nerdy guy looking for that perfect nerdy girl, look for the signs. At the very least, look for the girl who scents you. If her head pops up or her eyes go big or she makes the high-pitched squeal of the overjoyed fangirl when she sees your shirt or hat or wallet or whatever, you know like has found like.

2.) If you’re going to hit on girls out of the geek group, you have to come up with better pick-up lines than this. Or better delivery or something. Because you’re already at a disadvantage with these women. They won’t get most of your references. They’ll likely have very different interests than you. And they’re used to a different social pattern and rhythm than you. Finding common ground will not be easy. If you’re going to chat up girls outside the nerdy social circle, you’re going to need a new, non-nerdy approach.

’Cause that Jimmy Johns Girl, who was so very plainly and very painfully not-nerdy, freaky-fast-ed her way out of there. She had no idea what to do with her Jayne-hatted hopeful. Which was fair, since he didn’t really know to do with her either.

3.) Even if you are hitting on geeky girls in-group, you have to come up with better pick-up lines. Geeky chicks are, by and large, smart. We’re funny and fun-loving. If you want to get our attention, just talk to us. Relax and just have a conversation.

Talk to that geeky girl about whatever it is you find interesting about her. Chances are something about her—her hair color, her eyes, her smile, her tattoo, the book she’s reading, or the clothes she’s wearing, whatever—caught your attention and made you stop and notice her.

Go up to her and tell her. Tell her what you like about it. Ask her questions about it. “Nice Star Trek tattoo; that’s in Klingon, right? What’s it say? What did you think about the last movie?” Endeavor to be as interesting to her as she is to you.

Sincere compliments are great conversation starters and—especially if the comment is about something non-superficial or look-based—will tell as much about you for noticing it as it does about her.

Also, realize that there’s no guaranteed topic or line for success and not every brush-off is necessarily about you. There have been many times where I’ve met nice guys but been too busy or preoccupied to suitably respond. Timing—which is so very often completely out of your hands, and hers for that matter—is a very key element to a proper pick-up.


* If you have a sex, kink, love, or life question for The Deviant Nerd, email Pip at PipJones.DeviantNerd@gmail.com.


And read more about Pip’s story in Brought to You By.