By Any Other Name - Why Terms Matter in Kink 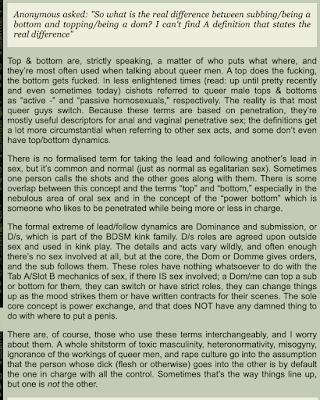 For me and a lot of kinky bottoms, the distinction is different than the definitions used for gay relationships. Like it doesn’t have to relate to sex, in its most traditional definition, at all. In kink, tops are the ones doing the action. Wielding the toys. Tying the rope. Bottoms are the ones being acted upon. Having the toys wielded upon. Being tied up.

And, while there is a certain amount of power dynamics in play here, it lacks the formal agreements and role-playing dynamics of D/s.

Like as a bottom who is not a sub, I don’t use titles. I may let others take more of a lead during scenes, but I don’t take orders. For me, my bottoming is entirely based in sensations. The fact the I love the stinging feel of a crop on my thighs or the constriction of rope. But I personally get absolutely nothing out of role playing. Playing with me will not leave a top feeling in control or in power, mostly because I tend to top from the bottom. I bottom; I do not submit.

Submission takes something else. It’s a mindset, a role one takes on for the space of a scene. It is taking the idea of power exchange and playing with it. Heightening and dramatizing it beyond that of just who-does-what-to-whom. It takes those action-based roles and adds more meaning to them. It makes a decision in one scene an order in another. Hopefully, an order that was mutually negotiated and agreed upon in advance for both parties’ pleasure, but an order none the less. And all that that implies. Suddenly, the sub’s pleasure comes not just from the act and sensation–the way it does for a bottom–but also from the psychological act of submitting, of giving someone else power and control. And vice versa for the Dom(me).

Power dynamics matter in kink. And you should know where you stand with them going in. Vanilla people too often make fun of us for overcomplicating sex with jargon they view as unnecessary in an act they find simple and natural.

We cannot afford to do that to each other. Because our sex and play is, by nature, complex. And needs that jargon and the distinctions it lends. Or, like I said, you may be disappointed and left wanting, as a sub expecting to play with a Dominant, only to find yourself playing with a top. Or frustrated and let down, as a Dom(me), playing with a bottom like me. Or you may feel annoyed and pushed past limits, as a bottom like me, playing with someone who identifies as a Dom(me). These are important distinctions that hold a great deal of meaning in this world. We can't just stop using these terms because of a "shitstorm of toxic masculinity, heteronormativity, misogyny, ignorance of the workings of queer men, and rape culture," that absolutely does exist and should be acknowledged and placed into context. Because disregarding or downplaying their meaning may be advancing a cause at the expense of people.

They aren't perfect terms. And, like most words and phrases, they have some bad, toxic history. But they have current meanings beyond that history that is helpful and useful. And, if we police them out of existence, where does that leave those of us who identify with them?
Posted by Sonni de Soto at 11:07 AM