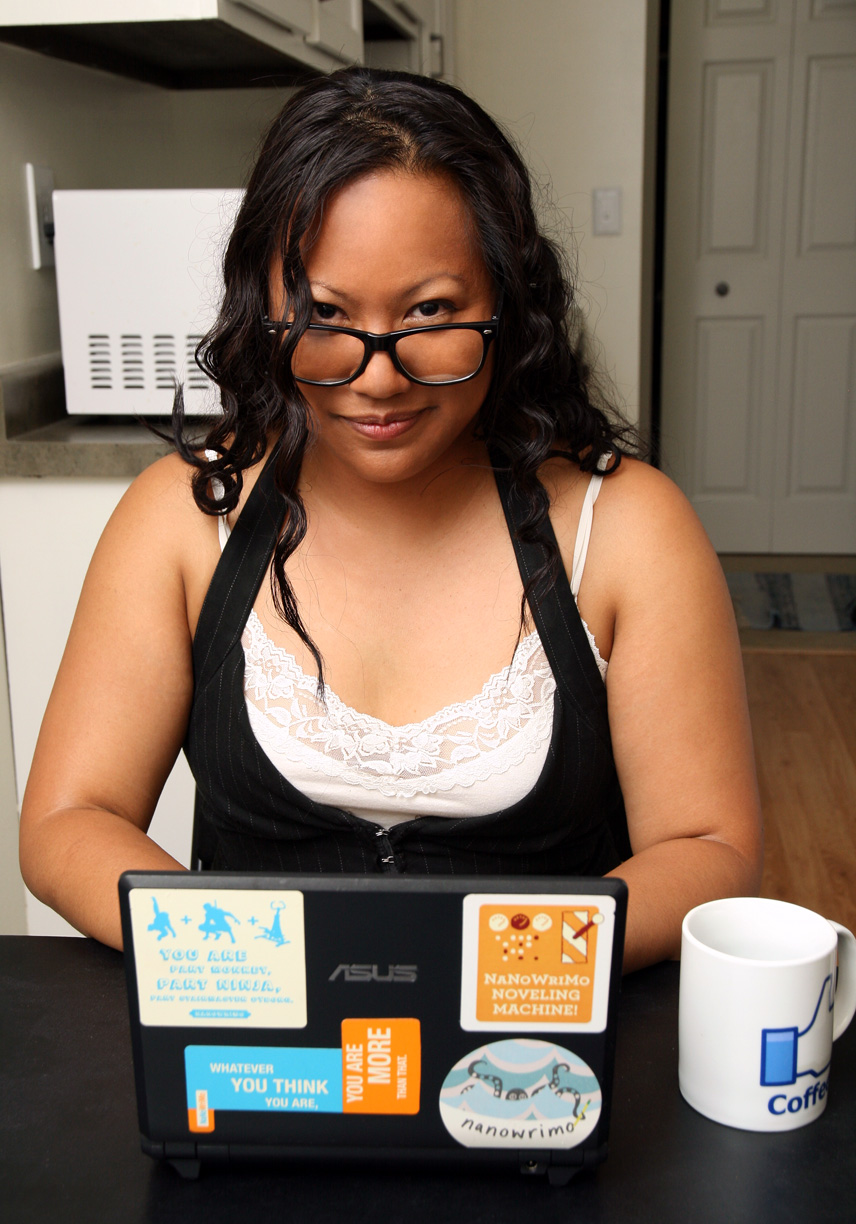 Peter Richards pushed his glasses up on the bridge of his nose and stared at his computer. With his computer open to SyncKink.com, the kinky social media website he maintained, he stared at Kat’s page. His wife’s page. Ever since her novel was published, she’d been so busy doing this and that for promotion and publicity. From blog posts to free stories, she’d been dedicated to using every non-working hour into putting herself out there.

Peter sighed and raised his eyebrows. Putting a lot of herself way out there.

He stared at the latest set of photos she’d released and gritted his teeth. He rolled his shoulders and tried to relax his suddenly tense muscles.

So she was naked in the photos.

It wasn’t a big deal.

Or it really shouldn’t have been.

He didn’t want it to be.

But he just couldn’t stop staring at the pictures of Kat laid out bare, imagining the hundreds—thousands—hell, maybe millions—of men out there on the internet who were staring at her too. At his wife. His Katherina.

His jaw clenched as he rubbed a hand over an inexplicable ache in his chest.

He didn’t know why he cared so much. It wasn’t as if he were one of those men who thought he owned her just because they were married. And, sure, they played power exchange games. He was her Dom and she was his sub. But he would never presume to think he owned her. Not for real.

It was her body and her decision of how she presented it to the world. She had every right to celebrate it, to showcase her beauty and share it with the world.

And it wasn’t even like she was naked naked. She was…strategically nude. Seated at very deliberate angles. Hidden behind precisely placed props. Her long, thick, dark hair draped over her beautiful, saison-shaded skin, offering the slightest peeks at her pretty, petite body. The pictures were erotically tantalizing without actually showing anything.

They were beautiful, those photos. Tasteful, really. More about the hooded look in her tilted, lotus-shaped eyes, the slant of her slyly smiling lips, the blush sweetly coloring her soft, round cheeks, than her nudity anyway. Living on the sun-loving coast, he saw more scandalous wear walking down the beach every day.

He just couldn’t look at it anymore. Not without going insane. It felt too much like sharing her—sharing the innermost intimacy of her few beyond him ever got to see—with unknowably countless viewers. As if that intangible, grabby gaze were taking something from her. From him.

He grumbled and swiveled in his chair before looking at the clock. This line of thought was stupid—he did know that—and it was late. After 8:00.

Huh, Kat should have been home hours ago.

His jaw jutted and fought the urge to sulk. It was just that he never saw her anymore. She was always at work these days or off doing book stuff or promotion stuff. Or taking more pictures. And, even when she was home, she was either sleeping or snapping at him. He just felt so distant from her. Like she was slipping away from him. Bit by bit everyday. It made everything—the pictures, the time she spend on her book, hell, the time she spent sleeping—feel worse. Like one more thing keeping them apart.

Frustrated, Peter stood up and strode away from his computer. Moving to lean against his bookshelves, he glared at his desktop. He hated that he felt like just another guy jerking it to her pictures; it felt as if those digital images were the only time he got to really see his wife now too.

And, God, how bitterly insecure did that make him sound? Sighing, he shook his head and ran his hands through his hair.

This was why he hadn’t said anything to Kat. He just couldn’t tell her how he felt. It was just so stupid. And his problem, not hers. It was something he had to work out. On his own. Because she didn’t need to be burdened with his fucked-up issues. Especially when she had enough things stressing her out without adding in his lame insecurities.

He looked at the clock and frowned, worry creeping in uneasily. It really was late. Even with her recent habit of late night hours, Kat should have been home by now. Digging in his pocket for his cell phone, he dialed her number. He thought about her stuck in traffic, tired and stressed. Or, God forbid, still trapped at her office, still drowning in work. He sighed and ran his other hand through his hair, tugging at the strands, as he stared out his office window at the dark night falling over the ocean.

Because, God, he missed her.

Kat Valdez-Richards sat hunched over at her desk, her tired eyes watering as she stared unblinking at her computer. Groaning, she pushed her long, dark hair out of her eyes and looked at the time in the corner of her screen.

Almost ten at night and she was still here in the empty office—even the cleaning staff had left her by now—not even close to finishing the massive amount of work her boss had dumped on her desk this morning. Right on top of the ever-growing mountain of work that he’d been steadily forming for more than a week already.

She closed her burning eyes and sighed. She’d been staring at columns and rows and pages upon pages of numbers for more than thirteen hours now.

It was punishment. She knew it. Administrative limbo. A wild goose chase that her boss, Stan, was torturing her with until either he could think of a fireable offense to go to HR with or Kat quit. It was the only explanation.

Her job, even under normal circumstances, wasn’t glamorous or exciting or even all that satisfying. It was a paycheck. A job that she was qualified for and could do pretty effortlessly and without much taxing thought.

Until Stan decided to send her on impossible searches for needle-in-a-haystack invoices and correspondences that no one cared about and didn’t really matter. Decided to bury her in multi-yearly reports and novels of hand-scribbled notes from nearly a decade ago. Decided to drive her insane with hunts for missing, misfiled affidavits and games of outdated contact tag.

She hadn’t even had time to take lunch in forever, since Stan was constantly pulling her into meetings and conference calls that she had nothing to do with right around her lunch hour all week. More often than not, she dashed to work more than an hour early, coffee still in hand after a very forgettable breakfast, only to work eleven, twelve, sometimes fourteen hours a day, coming home to a cold dinner and an already asleep husband.

She sighed and grabbed her mouse. Peter. God, she missed Peter. She barely saw her husband these days. If he wasn’t already sleeping by the time she got home, she was too tired to do more than shovel barely re-heated leftovers into her mouth and fall into bed unconscious. The few times when he’d tried to talk to her, to offer comfort and support, she’d grumbled almost unintelligible, aggravated English at him while shoving him away.

She didn’t mean to. God knew, she didn’t want to push him away. But she was just so tired. Tired and stressed out. To the point where comfort and support were too much to deal with. Where her husband—the love of her life—was just one too many things on her plate.

And she hated the fact that was true. Kat shut her eyes and laid her head on her desk for a moment.

She should just quit.