You First, Then Me - Part One 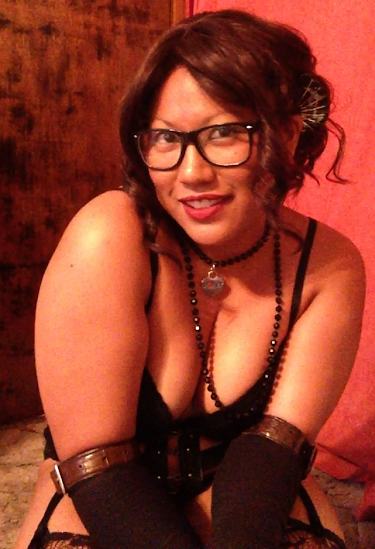 Brought to You By
Week Three(ish) Excerpt - Part One
Welcome back to the wonderful world of NaNoWriMo, where I try to write a novel in a month. Just like last year, here's an excerpt from what I've done for Week Three (sorry it's being posted a bit late) of this literary adventure. As always, please enjoy.

“How about this?” Pip suggested. “We’ll switch off. I’ll start off topping you, give you an idea of what it’s like. Then you can take a turn. Sound okay?” she asked.

“Yeah,” Phil said with an accepting nod, sounding a little more sure. “Yeah, I can do that.”

“All right,” she said, feeling more confident now that there were on familiar ground. “All right.” She rolled her neck and shoulders, shifting her weight between her feet, bouncing like a boxer. Let’s do this. “We’ll start off easy.”

She smiled, twirling her long, manicured finger at him. “Turn around,” she purred at him playfully before quirking her eyebrow at him, “and bend over.”

“Excuse me?” he scoffed, his spine straightening in indignant defiance.

“You said you wanted to try out our new toys,” she reminded him as she picked up the rubber scraper off the table. “If you want to do this,” she said, shrugging innocently, “you have to assume the position.”

He sighed and rolled his eyes. “I can’t believe I’m doing this,” he muttered under his breath as he turned around, bending a bit at the waist to place his hands on the smooth, wood surface.

Playfully, she smacked him in the butt with the scraper, making him yelp and jump, even though she’d barely hit him. “Don’t be a killjoy,” she tsked as she pushed on his shoulders gently but firmly, bending him over more so his ass stuck out.

Pip raised an eyebrow. Phil had a nice ass. Bent over like he was, his jeans cupped his backside adoringly, outlining and accentuating every curve and line. He shuffled his feet a bit nervously, his hips swaying and his back arching. She smiled as she watched his body move, like liquid unease flowing through him.

She lay a hand on the small of his back, comfortingly rubbing a bit before pressing more firmly. “Okay,” she said. “You ready?”

“I guess,” he said as his body tensed.

“Relax,” she told him. “Studies show that, if you anticipate the pain—if you think too hard and worry about it—it’s much worse than if you just confront it.”

“So bring it on?” he asked cheekily, wagging his backend a bit.

She grinned. “That’s the idea.”

She felt him take a deep breath as his muscles relaxed and his back bowed, making his ass—his great ass—push out more. She tilted her head to the side, enjoying the show. Nice.

She swung back her hand, the rubber scraper at the ready.

Phil closed his eyes and forced himself to breathe. It was really hard not to tense up as he waited. He wanted to squirm under her scrutiny and her touch. And the thought—just the thought—of that scraper slapping him made his jaw lock and his brain stall.

God, he hoped he didn’t embarrass himself.

He could take it. He was sure. It was just a rubber scraper. Not even a large one. Just a flimsy piece of colored rubber on a plastic stick. How bad could it be? He could take it.

But what if he couldn’t?

He wasn’t this great hulking brute or anything—he wasn’t exactly athletic or strong; he was, quite bluntly, an egghead—but he didn’t think he was exactly a weakling either. But, if he was honest, the idea of chickening out—or, God forbid, something ridiculous like crying or begging or any of the mortifying things he’d seen in the glimpses of porn—frightened him far more than the actual strike.

She hit him. Lightly. On the left butt cheek. It was nothing really. She’d actually hit him harder in the store. Phil let out a breath. Okay, yeah, he could do this. This was nothing.

She hit him again. A little harder this time on his right cheek. He could feel a bit of the sting on this one as it tingled warmly—almost pleasantly—just beneath his skin.

She hit him again and again, switching off sides. Always in the same spot, creating a slowly warming burn, the intensity of each hit building on and bleeding into the last.

He felt his body fall into the rhythm of it. Smack. Smack. Smack. It was almost comforting. Like the calming beat of a heart. He felt himself settle and sink into it, anticipating the strike, despite her advice.

But not in an anxious way, like before. Rather in an odd, almost welcoming way. Like he knew it was coming. And that was okay.

He was just getting lost in the pattern, when she changed it. Striking him just a touch too low, where the skin was new and untouched. He yelped and jumped, her hand holding him in place even as he pushed against it.

Fuck. He really hadn’t realized how hard she’d been hitting him, the warmed skin becoming steadily desensitized with each hit. It wasn’t until she switched her target that he noticed, the shock of that strike against unready flesh a sharp, cold cut that stayed and spread over his skin.

He heard her coo at him, rubbing his now, he realized, rather sore ass, the light caress of her hand feeling electric and hot across the rough material of his jeans. She grabbed his ass in her hands. Jesus. He sucked in a harsh breath as his back arched sharply and his ass involuntarily tucked in on itself as if it could hide from her.

“Time for a break?” she asked him.

“Yeah,” he said as she squeezed, making the sting in his ass spread through his body until he felt it like a stroke against his cock. He stiffened, the feeling strange and not unwelcome but certainly not expected. His knees quivered as his head swam with a myriad of dizzying sensations. Yeah, a break was probably a good idea.

She backed away and let his straighten. He swiveled his back, his body adjusting to his new position and the feelings swirling unsteadily inside him. He turned to sneak a peek at Pip, the smug, satisfied look of a job well done on her face irking him even as the corners of his lips kicked up in ready eagerness.

Time to turn the tables.

Email ThisBlogThis!Share to TwitterShare to FacebookShare to Pinterest
Labels: Brought to You By, Donovan's Door, NaNoWriMo, Phil, Pip, Stories