Inside Scoop - Writing Kink From a Vanilla View

I remember joining a writing forum for erotica writers when, more than half a decade ago now, I first began toying with the genre. Being one of only a few writers with actual hands-on experience with kink, I’d quickly become a vocal member of the group, offering insight into a world too many people thought of as only a fiction as true as ghosts or witchcraft—sure, they were fairly certain that there were people out there who bought into that kind of thing, but they were always those kind of people.

An other that felt almost as unreal as the belief itself.

That was the first time I realized how much I wanted to show them—show everyone—that we’re just like everyone else. The fact of the matter is kinky folks—despite what we and everyone else in the world like to think—are just like everyone else. We have jobs and families. We have responsibilities and relationships. We have the same banal dating histories and past experiences. We go on regular dates. We have regular sex. We kiss. We make love. Hell, we even cuddle and use condoms! For the most part, we have fairly normal lives and all that entails. We aren’t unreal billionaires or dark fairy tale characters. We’re chiropractors and stay-at-home moms. We’re next-door-neighbors and school teachers.

We just have leather-wearing alter egos and toy bags shoved in the back of closets.

But it’s hard unravelling centuries of misconceptions and misinformation based on little more than sex-negative prejudice and presumption or willfully unknowledgeable fantasies that would rather not have to realize that they’re playing very offensively fast and loose with other people’s realities.

It’s just a lot to sort through to get to any kind of truth.

Because truth is a complicated and complex thing. It’s wrapped up in all kinds of context. And one person’s truth may not be another’s. And the truth you would swear up and down today may be upturned tomorrow.

Because we’re all always learning. And we should be. We should be thinking about our world and asking questions about the things we don’t understand. We should be looking at the sources we seek and trying to find the ones which would best know what we want to learn. Because we shouldn’t be content with presumptions, even—especially—when they only confirm our already-held biases.

This lifestyle, like baseball and Hinduism and the indigenous plant life in Indonesia, is real. It’s valid. And it’s something that real people live with and love. Doesn’t it deserve at the very least the respect of a quick Google search? Every social network nowadays has interest groups devoted to it. Every bookstore has a shelf in the sexuality/sexual health section housing books—fiction and instructive—discussing it. Statistically, whether you know it or not, you probably know someone who’s tried it in some fashion or other.

This lifestyle is and always will be a big part of our fictional landscape and fascinating fodder for our imaginations. But it is not fiction. Those of us who live and love it are not imaginary. We are your neighbors. We are your coworkers and friends. We’re your family members and your partners. And we see and hear what the world thinks of us everyday. From anti-kink feminists who want to save us to cops who don’t. From medical and judicial authorities who are supposed to have or best interest in mind but would rather we didn’t exist. To a media that will happily profit off of the lifestyle they find so entertaining at the expense of those who live it. And that kind of misrepresentation and casual disrespect, however unintentional, takes a toll.

I wanted, with Show Me, Sir, to give that toll a voice. A relatable story. Not just from the kinkster’s point of view, but from the well-intentioned toll-takers too. Because it’s not a story we often see. Too often we see the sides as being insurmountable and uncrossable. But they don’t have to be. I wanted Max to start out from a place of cemently sure ignorance. I wanted her armed with strongly held and perfectly reasonable philosophy and well thought out conjecture. I wanted her to know her finely crafted opinions as unquestionable facts about a world she'd never seen or experienced.

And then I wanted to shake those hard and set views. I wanted to show her moving from talking about subjects she personally knew nothing about to talking to people who did. And I wanted her to question them, just as much as they questioned her. Wanted them to learn as much from her as she did from them.

As much as this story is one about discovering kinks and fetishes, this is a story about uncovering truth. The truth that there is nothing wrong with being a kinkster, just as there is nothing wrong with being vanilla. If that is who you are and who you want to be, as a kinkster, I wish you double scoops, and hope you'd do the same for me. The world is a better place when we allow everyone the right to be—to exist and be seen as—who we really are and who we want to be. When, instead of relying on assumptions to inform our world, we ask for and learn from each other's truths. When, instead of talking about each other, we find better ways to talk to each other.

CHECK OUT MAX'S STORY
FOR YOURSELF
AVAILABLE NOW
AT AMAZON 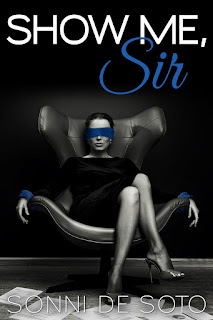